A Better Product On And Off The Field

SEAL Team Physical Training offers Athletic Team Building to motivate and train athletic teams to work together as a team and become winners.

Every school wants its athletic teams to win championships. But how do you gain a competitive edge that builds mental and physical toughness while proving the value of teamwork?

We have adapted SEAL Team Physical Training to address the special needs of athletic teams in ways that can't be duplicated in the gym or on the athletic field. Your team will benefit from physical and mental challenges designed to enhance physical and mental toughness. Just as important, your athletes will learn to rely on each other to achieve far more as a team than they can as individuals -- a lesson that will pay great dividends when the game is on the line late in the season.

We deploy to your athletic facility or a location of your choice. We bring the gear, official SEAL Team Physical Training t-shirts. You bring your team and plenty of gumption.

We can customize sessions for a more intense workout level, as well as incorporate more challenging group evolutions. This is a great jump start for pre-season training camp. 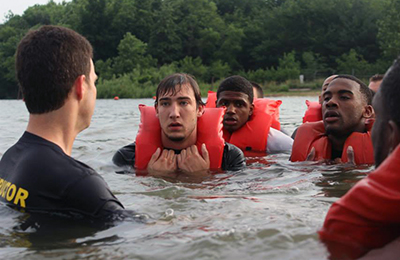 Contact SEAL Team Physical Training to discuss a training plan for your team and learn more about scheduling former US Navy SEAL, John McGuire to meet with your athletic team.

Instructor McGuire has an unbelievable feel for what it takes to put a team together.

SEAL Team PT has worked with us for several years. Instructor McGuire and his staff do an incredible job with conditioning, team building, developing communication and leadership training. Every year I walk away extremely grateful for this opportunity. I love the fact our players are placed in situations outside their comfort zone and challenged to find solutions. All season long we refer back to the lessons we learned during this training. It is such a great way to kick off the year!

A life changing experience for our team and program. John led us in a way that was confrontational yet simple. He enabled and trained us to attack our fears, rather than give into them. There is a significant difference in my players after this experience that will influence the outcome of our season and more importantly impact us for life. We will be forever grateful to John for his leadership and influence he has left on our team.

We were pushed to the limit with push-ups -- something so simple but difficult especially with John demanding excellence on every rep and exposed the consequences of starting over - real pressure.

Each year I only get 5 contact days in the summer to work with our guys. This summer I used 3 of those day with SEAL Team Physical Training and we accomplished more in these 3 days then we have each of the last 15 summers.

Although I had watched the videos of VCU I was still unsure of exactly how you were going to react working with high school players. I was slightly concerned it would be too hard or the kids would get hurt. However I thought your teaching style was spot on, respectful but forceful and the activities pushed the players to their limits but did not jeopardize their safety. Your ability to read people was extremely impressive.